Scientific interest in the problem of proving criminal proceedings for economic crimes is caused by the urgent need to close loopholes of legislation in this area. Investigating the peculiarities of the evidence will increase the efficiency of the officers conducting the pre-trial investigation, bring those responsible to justice and recover damages.

The process of investigating economic crimes can be complicated by the following problems: a crime may be committed not by one person but by several persons, since the nature of economic crimes by its nature must have a well-thought-out plan of action; mandatory presence of intellectual element of the act; There may be several episodes of criminal activity. Persons committing economic crimes have the power of authority while in office and in the performance of their functional responsibilities. At present, there is an urgent need to improve the system of investigation of economic crimes.

Investigation of economic crimes is a priority of law enforcement agencies. In order to increase the effectiveness of pre-trial investigation and to prevent errors in proving such a category of cases, it is necessary to pay attention to the specifics of the investigation process.

Evidence of economic crime consists in the collection, recording, verification and evaluation of evidence at the pre-trial stage of criminal proceedings. The process of proving economic crimes has its own peculiarities: the procedure for gathering evidence; specific type of documents of financial and economic activity; establishment of a criminal intent of a person; tracking cash flow. Economic crime investigation is a complex step-by-step procedural mechanism for bringing persons to justice, fulfilling the main tasks of criminal procedure law. 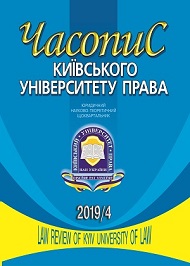